I guess tonight is just one of those nights. It’s 3am (hence, please excuse the very poor grammatical errors that are to come) and all I can think about is my dog Jingle. It doesn’t take very long for anyone to realize I am a dog lover. My dog’s photo is the wallpaper on my phone, and the cashiers know because Jingle’s picture is on my credit card.

Jingle passed away July 13, 2014 at 14 years old and I think about him always. I don’t think I’m “over him,” and I don’t think I’m ever going to. He was my first dog and my absolute best friend. When you thought there were so many things going wrong in your life, when nothing is turning out the way you wanted it to be, Jingle was always there with his ever wagging tail and big grin. Jingle always had a habit of licking people’s faces, and although I always would push his head away to get him to stop, it would only encourage him to go at you more. I wouldn’t mind it so much right now.

Jingle was a beautiful Labrador Retriever. If anyone is questioning what kind of dog to get, Labrador Retrievers aren’t only a safe bet, but also the best. We picked him out from a breeder and Jingle was the runt of the litter. That’s why his body build remained so small his whole life, no matter how fat we got him to be. During his puppy stage, he chewed everything, but his favorite was shoes. I remember I had a favorite pair of white sandals. They kind of looked like the salt water sandals except they had a purple daisy flower pattern along the inside of it. One day it had teeth holes all over it and was deemed unwearable ever again.

A couple years into becoming dog owners, my sister and I were still learning how to be responsible dog owners. We had agreed to keep both dogs washed and clean, well fed and watered, and the yard free from dog poop. And as we were under the ages of 10, we were still learning our responsibilities and would often forget. Our mom wanted to drill it into our heads and so one day when we returned from school, the dogs were gone. Our mom then proceeded to tell us she gave them away as we did not seem like good owners. We pouted, we cried, and we begged until we re-promised our mom all of our responsibilities again, and then she took us to ask for the dogs back. As it turns out, she never gave them away nor was ever planning on keeping them away. They were simply at one of her friends backyards, just chilling and waiting for us. We learned our lesson.

Jingle was always more on the timid side. He very rarely barked as he was scared of his own sound. The only times would be when we accidentally stepped on his tail or he saw his reflection in the sliding glass door. When we went for walks, Jingle would always pull on the leash so hard it would drag us down. He was actually the culprit behind a fairly large handful of friends who received knee scrapes and scars as an attempt to take him for a walk. I always wished that he was an older dog so he wouldn’t have as much energy when we went out. But I take that back. He was so full of life and love and saw good in everything. Every time you walked into the house, Jingle would immediately lie down with his belly high in the air waiting for you to pet him. You would bend down to just give him a little scratch, and Jingle could imagine no happier thing. 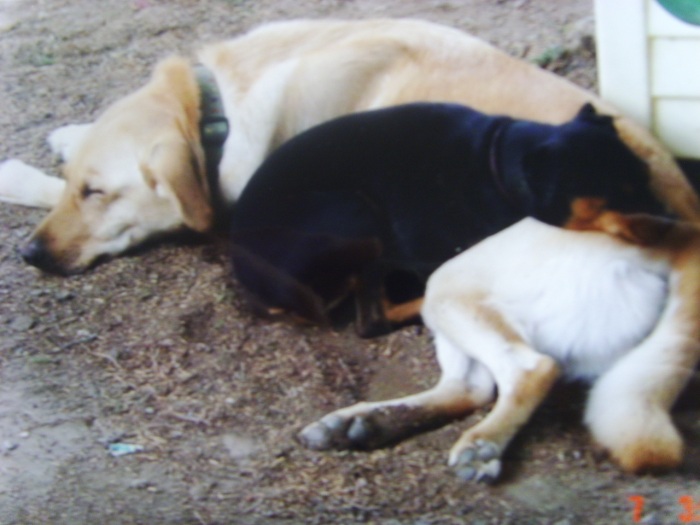 There was this one time Jingle had escaped our yard. We frantically looked and searched for him through all the neighborhood blocks. An hour or two later, we returned home, only to find the panting, drooling, smiling from ear to ear dog, waiting for us on the front porch. He had a good run, and gave us a good one too.

There was this other time when I was really mad at my parents. I forget what it was about, it was when I was under 10 so it must have been something silly. But in the heat of that moment, I could have sworn that my “parents” were not my actual parents and that I was adopted. That to me was the most logical reason they did not give me what I wanted, and so I looked up my birth certificate. Sure enough, my parent’s names were there and I had a huge cry fest. I don’t remember why or what triggered, but I do remember Jingle sitting patiently right next to me, licking my salty tears away. 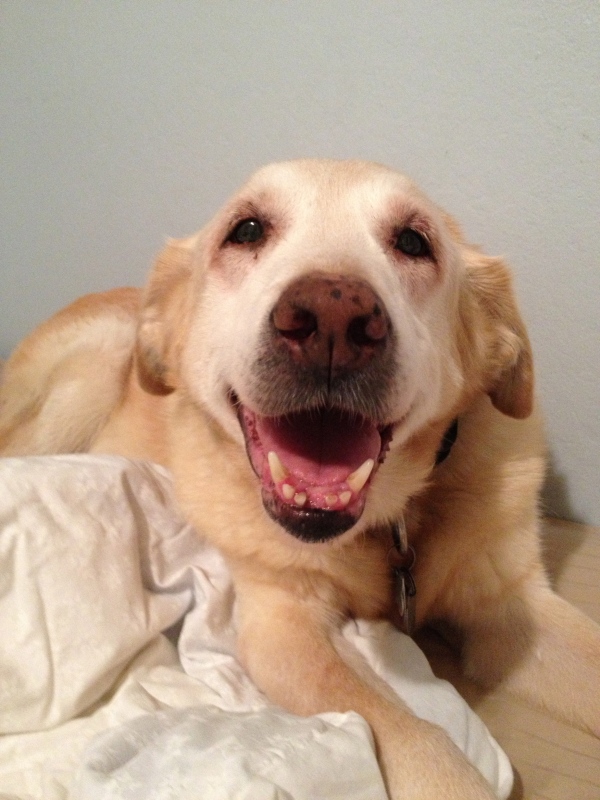 As Jingle and I got older, we became more and more attached to each other. During his upbringing, Jingle was to sleep in his kennel or his designated area. However, there were numerous nights where I would sneak  him into my bed and we would just snuggle. I was once asked what my favorite smell on this whole entire earth is, and my honest answer, is my dogs. There’s just something about that musky dog smell that reminds me of home. Every time I needed a comforting, I would just smell into his fur and know it was going to be okay.

Jingle lived to please. He lived for affection and for the brief moments of attention we would give him in the midst of our so called busy and chaotic high school years. Yet that was all he wanted and all it took to make him happy. He wasn’t the dog who would chew up a cushion or need stuffed plushy toys to play with. He did enjoy the occasional squeaky toy or chew toy or tennis ball, but he thrived for affection. That dog just wanted to be loved and I wish now to just hold him one more time. 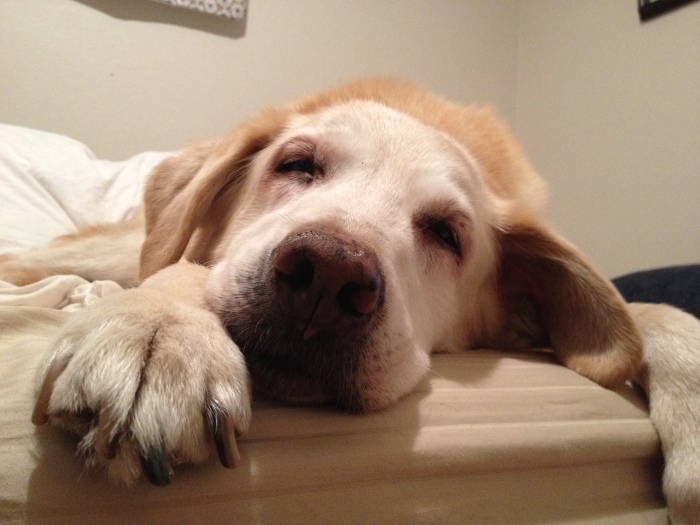 As Jingle became older, he developed cataracts and arthritis. His vision wasn’t as good and it was harder for him to run around. Soon, the squirrel chasing stopped and he would just sit outside and enjoy the fresh air. In the past, we always worried about our fence knocking down into the neighbors back yard because of the force he would exert jumping onto it. And then it changed to just being observant. You would be able to see his ears become alert when he heard a bird or relax when it was total silence.

Two years ago I decided that he was old enough to permanently sleep with me on the bed as his bones needed a softer cushion to lie down on. When I used to pick him up, he would be squeamish and try to wrangle himself out. However, during those two years, he knew it was going to be cuddle time so he just let me carry him like the big baby he was. Sometimes he would snuggle right up against me and start snoozing away. So many times in the night I woke up with his paws moving as if he was running. He was probably chasing all the squirrels in his field of dreams. The difference between Jingle and my other dog JJ is though, that Jingle would have just wanted to play. JJ would have had a feast.

Well, that 2014 summer came and I knew that it was only a countdown from there. Jingle had lost weight, did not eat nearly as much as he should be eating, and didn’t get as excited at the things he loved. His energy level had decreased to a point where he was just sleeping all day and night. I remember waking up at night and fearing he had already passed when I didn’t hear any breathing noises. I would shake him awake and he would groggily lift his head, look at me, then plop his head right back down.

Two days before he passed, I knew. He first stopped eating. I offered him his absolute favorite foods– canned dog food, chicken meat, eggs, rice, chicken broth, cheese, but nothing worked. He just did not eat. The next day, his body was just so limp. He could not stand up on his own. I held him up as I tried to get him to go to the bathroom, but he just lay there. Defeated. I would pick up his limp body, bring him back inside. Repeat a couple hours later, ending with the same results.

Once I realized how bad Jingle had got, I knew it was time. Jingle wasn’t in pain. He wasn’t whimpering or wincing or anything. Jingle just seemed lifeless and I knew he was ready to go. We decided that if he lived through the night, then the next day we would take him.

He lived through the night. That morning I had work and so I kissed his head and headed out. At 2:30, 30 minutes before I was to go home and call me crazy, but I literally felt my heart sink, and I knew. I looked at my watch, waited for 3pm to hit, and rushed home. My mom’s car in the driveway confirmed it as I pulled up the driveway.

When I left for college, I’ve always told and made it a point to my parents that if they ever had to put Jingle down or knew he was dying, they had to call me so I could either fly or drive back home to be there with him. Though he knows no English except “sit” and “down,” I told him that I would be there when he was ready to leave. He was my dog and my best friend.  I was so close to making it. I was only three blocks away and missed him by a 30 minute gap.

I think that is one of the reasons I am not over him yet. I haven’t had the proper closure with him that I had pictured or imagined. On one hand, I am glad, so so glad that we did not have to put him down on our own decision, but rather he passed on his own. It’s been a little over eight months but sometimes, I can still remember his smell, what his fur felt like and what it was life for him and all his shedding fur to snuggle right next to you in the torturous summer heat. I can still remember taking him to the local creek and him getting attacked by fleas, and I, over 14 mosquito bites on my feet.

I’ve put a lot of thought into what dogs lie in my future. At least I still have my old grandpa dog JJ to have, but he is also 14 going on 15 years and this cycle will begin once again, only now doubled. I’ve had many people ask me if it was worth it or not, and I think it’s an absurd question. Of course it was worth it. Jingle was my best friend and if I could, I would repeat the past just to hug him one more time. The death is painful, but his joy of life was worth it. There are so many other dogs out there, as I don’t think I can ever own another Labrador as I will always be comparing it to Jingle. He was just the best. I simply just want to hug and hold him one last time.

One thought on “Jingle”