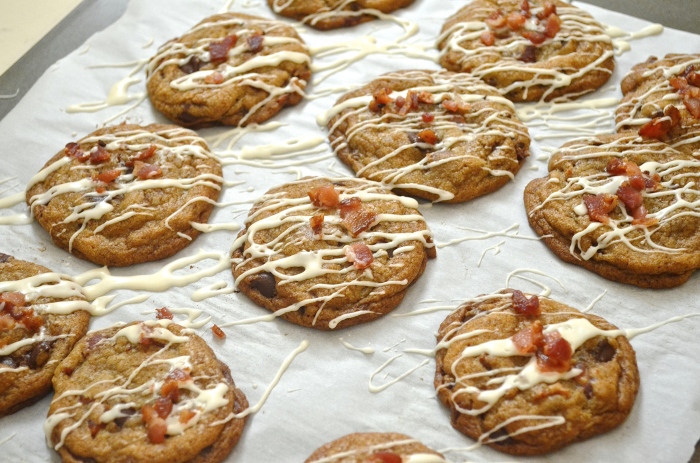 The marriage of bacon and maple. I’ve always seen bacon and maple donuts as well as bacon and maple cupcakes, but haven’t seen very much of them on a cookie. For work this week, we are hosting an event in which the theme for the night is bacon. I was asked to make a small treat to put into their gift bags, and the first thing that came to mind were to make bacon and maple cookies. 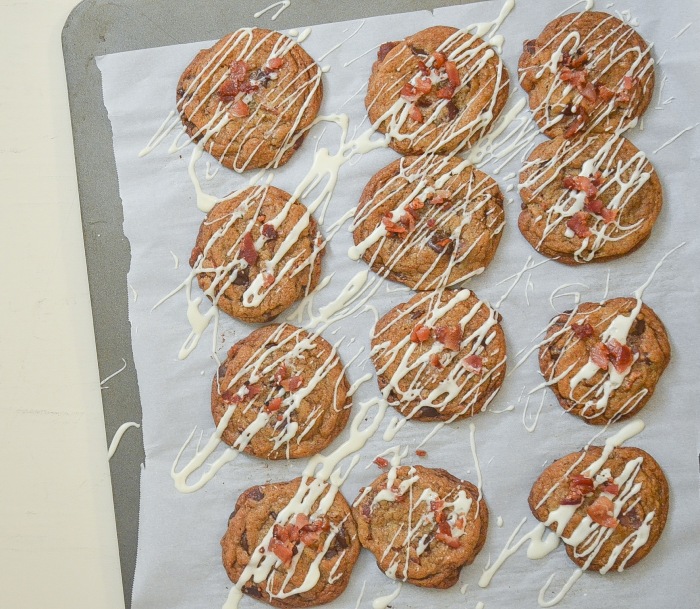 I ended up meshing the flavors of bacon and maple with my beloved chocolate chip cookie recipe that has been tried and true since I was in seventh grade. To it, I simply added chopped bacon and drizzled on a maple icing on top. While the actual taste of bacon very subtle, it adds a savory flavor that pairs well with the chocolate! 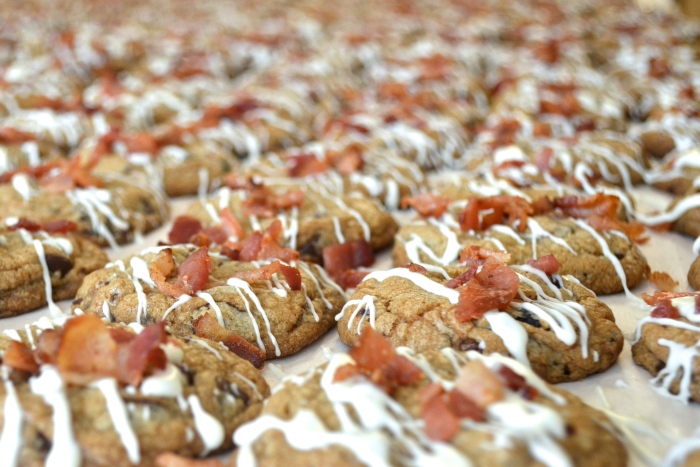 To begin, you need bacon. For this event, I had to make 160 cookies and ended up using 6 pounds of bacon. Yes, that is SIX POUNDS. But keep in mind that I double fried the bacon, rendering off as much of the fat as possible. So really, it came out to about 2-3 pounds that I actually used. The recipe that is put below is for a standard batch of 2 dozen cookies. 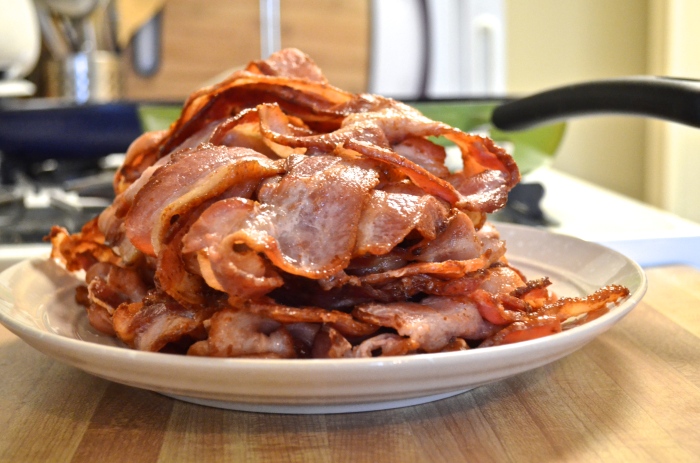 The above bacon is only half of what I used. Fry up the bacon until it has a beautiful golden color on both sides and remove from the heat, draining off as much of the fat as possible. 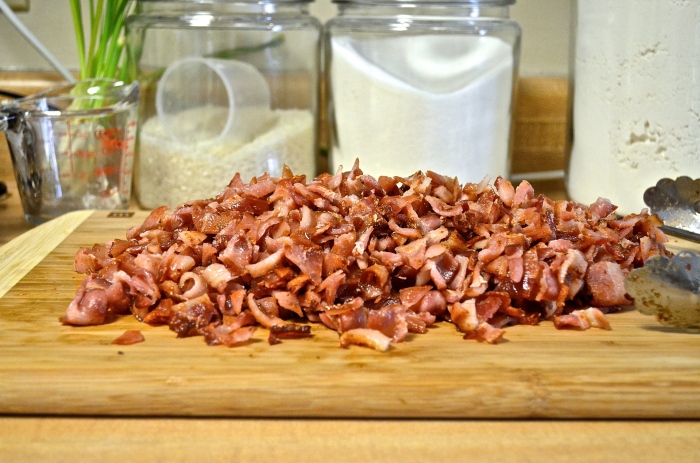 Cut the bacon into small pieces. You can use a knife to chop it up, but I find scissors are much sharper and faster at getting the job done. 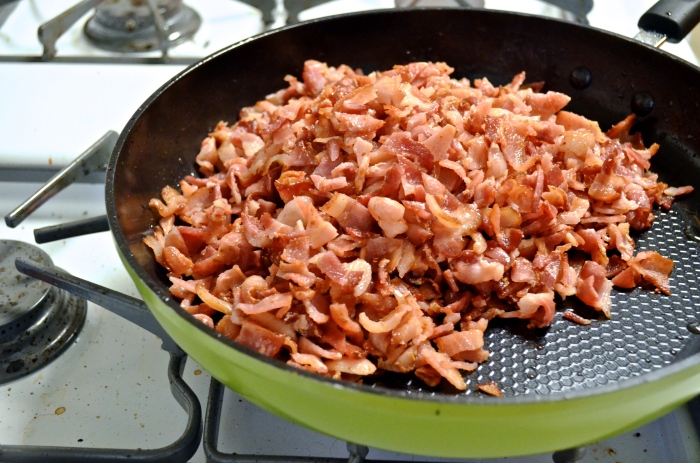 Now, we go back for the second fry. This removes any of the excess bacon fat…trust me, you’ll be surprised at how much fat will still come off the bacon meat! Once you think it has reached its peak and has removed as much fat as possible, place the bacon bits through a fine mesh strainer and drain out any of the extra oil. Place it in a bowl to cool down. 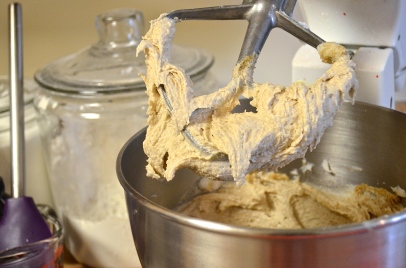 Now that you have your bacon, it’s time to make the classic chocolate chip cookies. To begin, cream together the butter and shortening. Slowly add the granulated sugar, then the brown sugar. Beat until well combined and scrape down the bowl. 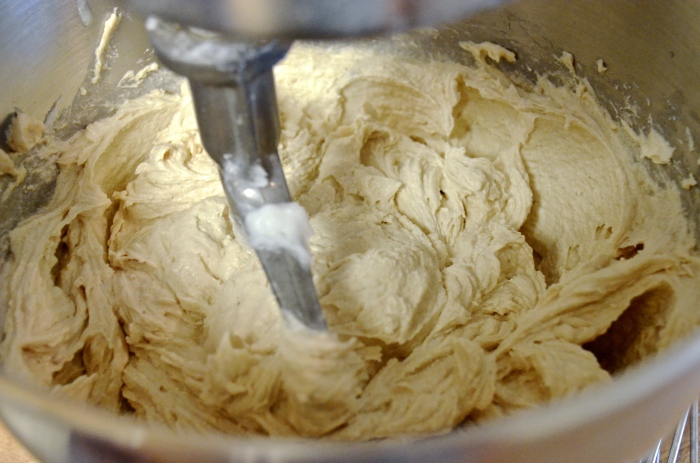 Next, add in the eggs, one at a time and make sure it is fully mixed in before adding in the next! It’ll start to really get nice and fluffy at this point! Then, add in the vanilla. 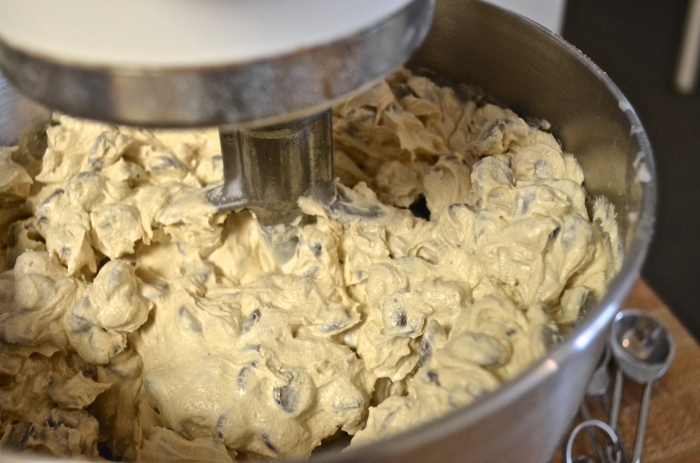 After this stage, add in the two bags of chocolate chips. I like adding in the chocolate at this point as it sweetens and deepens the flavor of the actual cookie with bits of chocolate getting pressed into the dough. 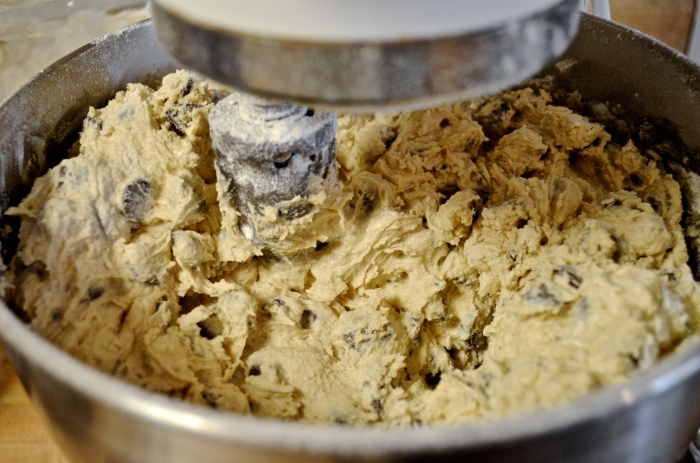 Now, sift in the dry ingredients. As soon as the dry ingredients have been mixed in, the dough is ready to be baconed up. Depending on how much you love bacon, you can either add more or less. I added two cups of bacon per batch of cookies. Just remember to save some bacon to the side so you have something to garnish the cookies with! 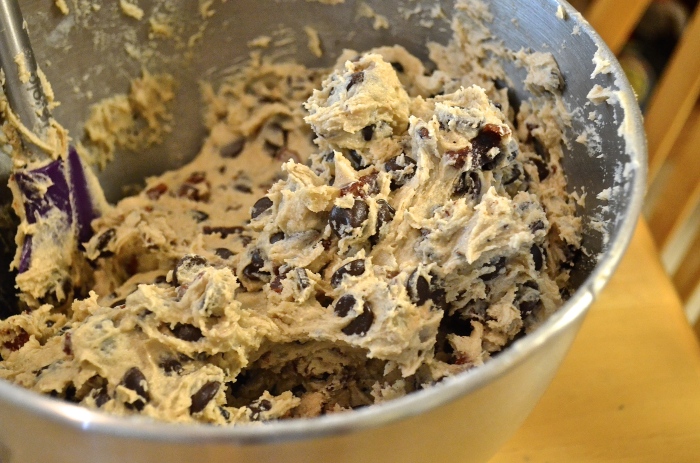 Fold the bacon into the dough and use an ice cream scoop to drop the cookie dough batter onto parchment paper. Bake at 375 for 10-12 minutes or until golden brown. 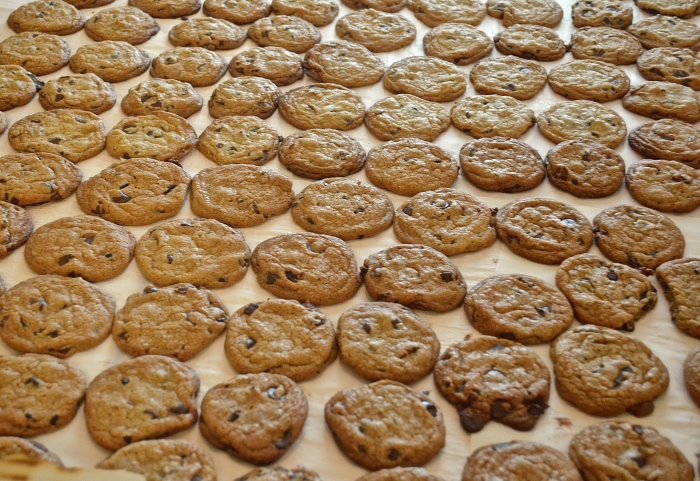 Allow them to cool completely before icing them. To make the icing, simply combine the powdered sugar, maple syrup, and heavy whipping cream and whisk in a bowl until smooth and lump free. The quantities of how much whipping cream you use will vary depending on the consistency of you maple syrup. Some syrups are thicker than others, so if it is thicker, use more whipping cream. If it is a thinner consistency, use less and adjust accordingly. 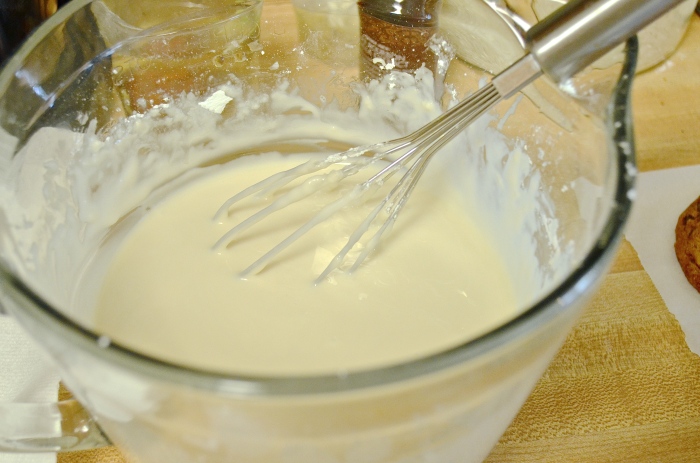 Use a fork and dip it into the icing and shake it back and forth on top of the cookies. This will give it a messy but rustic design. Garnish the tops with bacon bits before the icing sets! 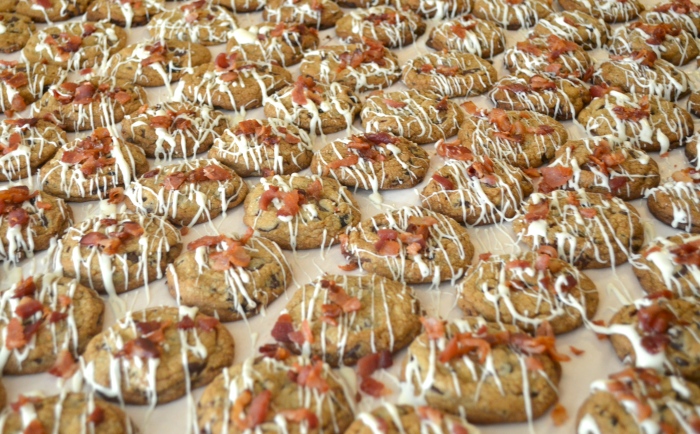 An insane amount of cookies makes me dizzy just looking at it. 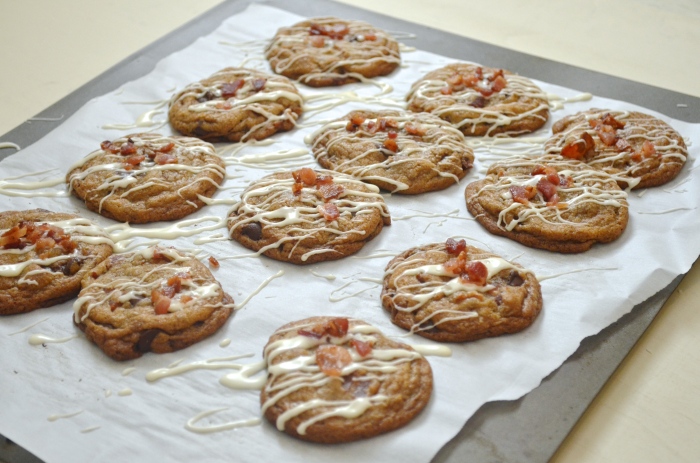 Remove the bacon from its packaging and fry until both sides are golden and crispy. Drain the pan from any bacon fat. Chop the bacon up into small pieces with either scissors or a knife. Return to the skillet and fry one more time to render off any of the fat that is still existing. Once the majority of the fat has rendered off, scoop the bacon bits into a fine mesh strainer and drain the left over oil off. Transfer to a bowl and set aside.

Sift in the dry ingredients and mix until just combined. Fold in all but 1/4 cup of the bacon, saving that portion to garnish. Using an ice cream scoop, drop the cookie dough onto parchment paper or a silicon baking mat. Bake for 10-15 minutes until the cookies are golden brown and slightly browned on the edges. Allow them to completely cool before transferring to a cooling rack.

In a medium bowl, whisk together the powdered sugar, syrup, and cream until it is lump free and smooth. Depending on the thickness of both the syrup and creams, you may have to adjust the recipe as you go to get the right consistency.

Once the cookies have been baked and cooled, use a fork and dip it into the icing. Shake the fork back and forth across the top of the cookies, then garnish with the reserved 1/4 cup of bacon.