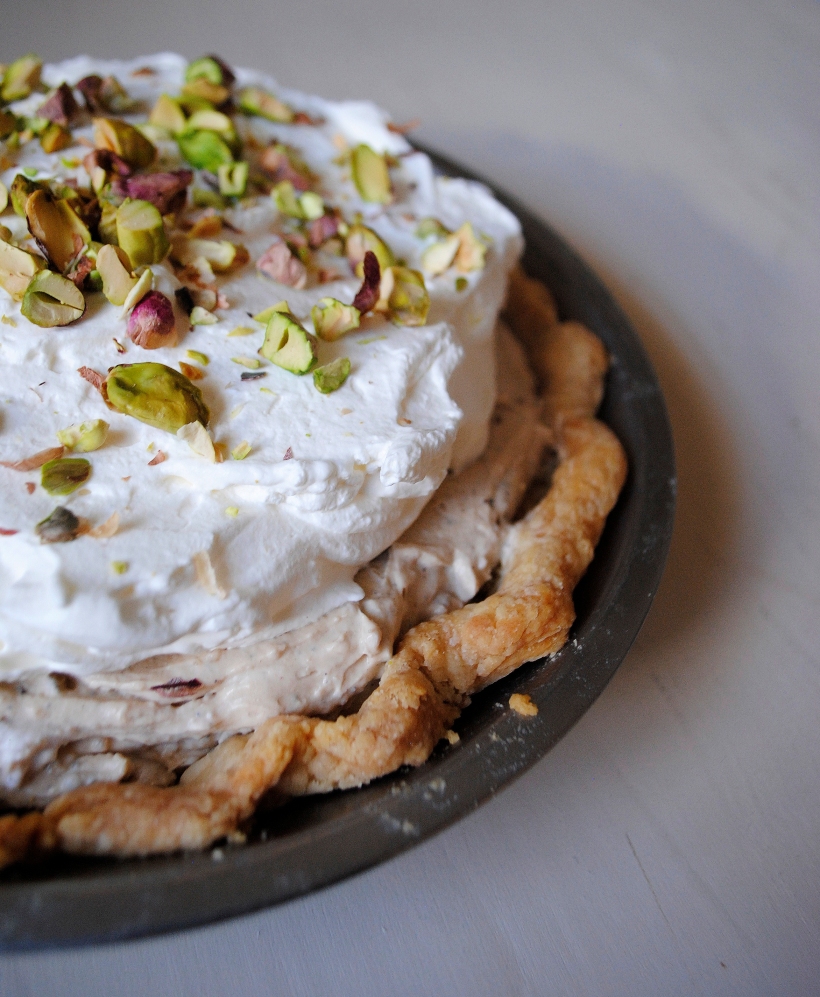 Ever since I’ve discovered how to make earl grey pastry cream, I’ve been meaning to do a step-by-step photo post. I first came up with the recipe for this Earl Grey Pie for a Pi day wedding last year. I modeled the pie after Pie Hole’s Earl Grey pie and the recipe has been adapted from Tartine bakery’s recipes. Since then, it has been my number one asked for pastry as well as this blogs most popular post! I hope that with these step-by-step photos, more people will be willing to try it at home and not be intimidated by it. Earl grey may sound fancy but making it is not! To learn how to make the pie crust, visit the post on the Perfect Pie Crust. 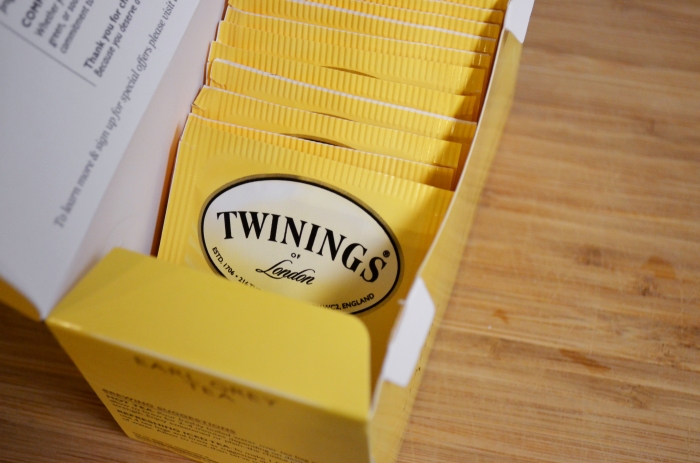 I always use Twinings Earl Grey Tea bags. Some other brands that make Earl Grey tea include other spices into the mix which will impact the taste of the pastry cream. I just like to keep it simple and pure. 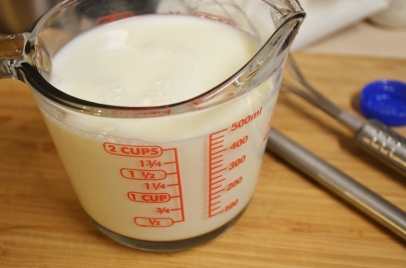 Measure the milk and salt and pour it into a medium saucepan over medium heat. Unwrap five teabags and snip the strings off. Over the next 5-10 minutes, allow the tea to infuse into the milk while gently stirring to prevent the milk from burning at the bottom of the pan. While you are waiting for the tea to infuse, you can prepare the other half of ingredients. 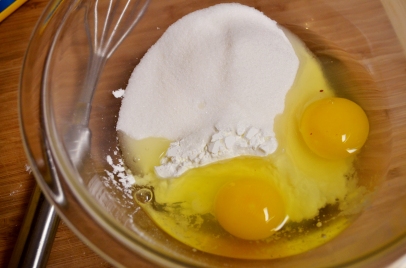 In a medium bowl, measure the sugar, eggs, and cornstarch and whisk until it is completely smooth and no lumps remain. Set aside.

Once the milk is at a beautiful tan, turn the heat up so it can come to a rolling boil. If some Earl Grey leaves escape from the bag, don’t worry, they’re going to be strained out. Take the pot off the heat.

As just mentioned, there may be some Earl Grey tea leaves that escape the tea bags. To strain them out, I put a strainer above the egg mixture. 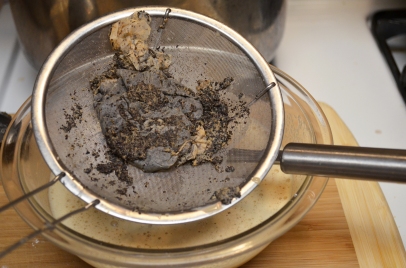 Now comes the task of mixing the two. As the milk mixture is hot and the egg mixture is cold, I don’t want the hot milk to immediately cook the eggs and make scrambled eggs. To avoid this, we need to “temper” the egg mixture by gradually adding in small amounts of milk at a time while whisking the egg mixture vigorously. This will slowly bring the temperature of the egg mixture up while dispersing the heat from the milk mixture. In small batches, pour the milk through the strainer to strain out any of the leaves, and quickly whisk the egg mixture as the milk falls through. Continue this process until all of the milk has been passed through the strainer and has been mixed in. Personally, I like to see small bits of Earl Grey tea leaves in my pie because it looks more authentic, so I’ll usually add a small amount of the tea leaves back into the mixture, but that’s just personal preference. If you happen to see small bits of cooked egg, don’t worry, simply pass it through the strainer once more to strain out the cooked egg bits.

Pour the cream back into the medium saucepan and return it onto medium heat. Use the whisk to constantly stir the mixture until it thickens. As the temperature of the cream goes up and reaches a certain temperature, the cornstarch will be activated and begin to thicken. At this stage, it is prone to burning or thickening at the bottom of the pot since that is where it receives the most heat. Just make sure you keep an eye on it and continually whisk until it is smooth, lump free, and bubbly. If there are lumps (like the top right photo), whisk faster and it should smooth it out. 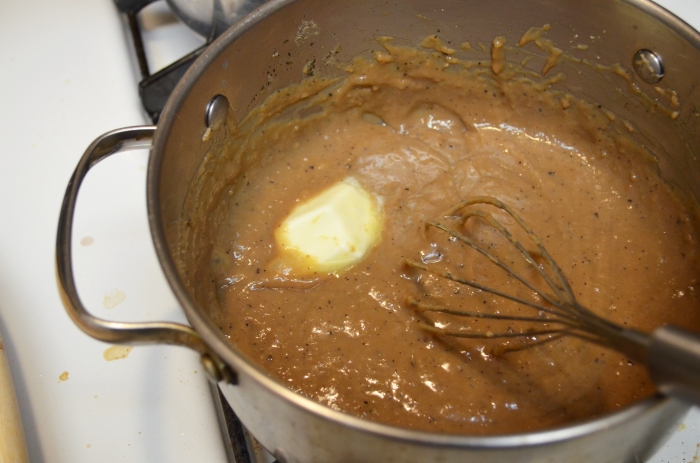 Once it is thick and bubbly, you know that the cornstarch has thickened it to the maximum. Take it off the heat and add in the unsalted butter and whisk until it is completely melted an incorporated in. 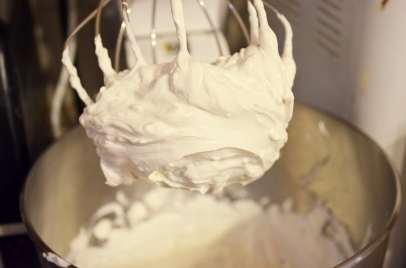 When you are ready to use the pastry cream, whip up the whipped cream. I like to use the brand Pastry Pride as it is an extremely stable and smooth when whipped up, but it’s sometimes hard to find. Whip until it reaches stiff peaks.

Now from that batch of whipped cream, remove about 2 cups of cream. This will be reserved for the topping.

Now into the bowl goes the Earl Grey cream. As you can see, it has firmed up quite a bit which is why it is necessary to lighten it up with whipping cream.

At first, it will look disgusting. The whisk attachment will break up the pastry cream as it gets coated with whipped cream. Keep whisking. 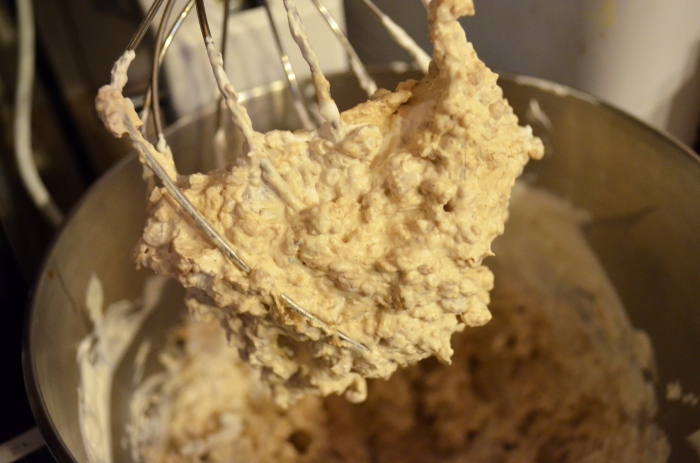 Then, it will look like cottage cheese. There will be lumps of Earl Grey as well as whisps of whipping cream. At this stage, it might be a good idea to scrape down the bowl with a rubber spatula. Then, turn the machine back on and continue to whisk.

Finally, all of the lumps will smooth itself out as the whipping cream is completely mixed into the Earl Grey. The color has lightened, the texture has lightened, and the consistency is smooth and silky. This pastry cream is finally ready to fill a pie! 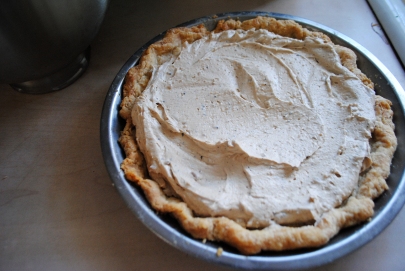 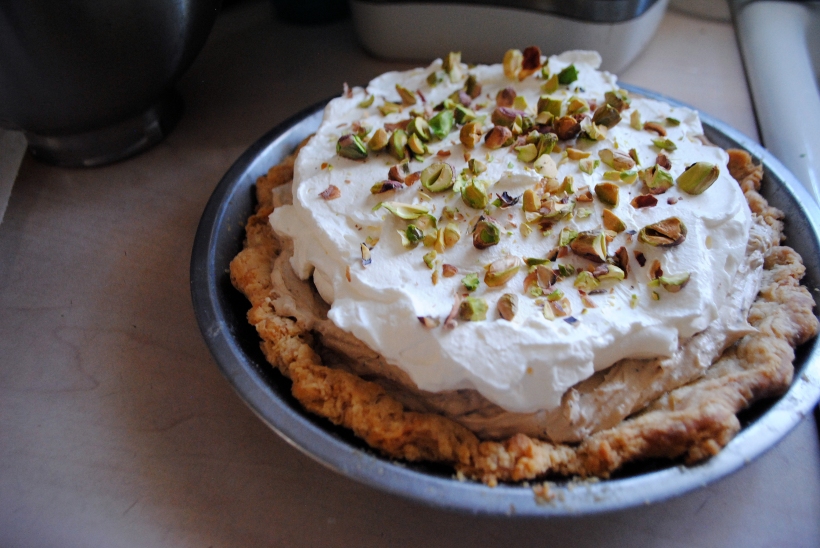 Dissolve salt in water and keep refrigerated until needed. With a pastry blender, cut in the butter and flour until it forms large crumbs. Add in water and continue to mix with the pastry blender until it loosely holds together. Roll it together so that it holds, wrap in saran wrap and refrigerate for at least 2 hours, or overnight.

Preheat oven to 375 degrees. When completely chilled, roll out to be 1/8 in thick and cover the pie tins. Use the back of a knife to cut off any excess dough. Place back in the refrigerator in case some of the butter has melted from handling the dough. Once it has completely chilled, use a fork to prick the bottom of the crust. Line the top with parchment paper and weigh it down with baking weights (beans, rice, etc). Bake for 20-25 min, until golden brown around the sides. Remove the parchment paper and bake for 5 more min, until all moisture has evaporated from the crust. Allow the crust to cool completely on a wire rack.

Heat the milk, tea bags, and salt in a sauce pan on low for 5-10 minutes, constantly stirring until the color turns a medium-light grey color. If some tea leaves fall out, it is okay, you will strain it out later. Once it has reached the desired color, bring the milk to a gentle boil. Meanwhile, whisk the sugar, cornstarch, and eggs in a medium bowl until thick and smooth. When the milk is at a boil, take it off the heat. Place a strainer over the egg mixture. Pour half of the boiling milk through the strainer into the egg mixture to temper the eggs, making sure to whisk vigorously to prevent the eggs from cooking.  Once all of the milk has been mixed in, return this mixture into the saucepan on medium heat. Whisk continuously until the cornstarch cooks and the mixture is thickened. Remove from heat and add butter and whisk until smooth and completely incorporated. Pour into a heatproof bowl and place plastic wrap on the surface of the cream to cool to avoid the creation of a “skin” layer. Allow to cool completely before using, about 3-4 hours. The cooled earl grey pastry cream should be very firm, needing to be lightened with whipped cream before using.

Once the pastry cream is ready to use, whip up the 1 1/2 cup whipping cream until stiff peaks. Remove 2 cups of whipped cream and reserve in a separate bowl. To the mixing bowl, add in the pastry cream and whisk the both together until completely smooth.

Meanwhile, microwave the 1/4 cup of heavy whipping cream in a heatproof bowl until it is bubbly. Add in chocolate chips and stir until smooth, making a chocolate ganache. Spoon the chocolate ganache into the pie shell, spread it into a thin layer, and allow it to cool completely.

Take the finished earl grey pastry cream and fill the pie. Smooth out the top. Take the 2 cups of reserved whipping cream and spoon onto the top and spread it out. Decorate with pistachios. Serve cold.